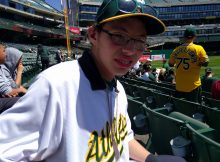 Things happen that remind me of my weaknesses as well as Ari’s. Ari and I went to see the Oakland Athletics play the Los Angeles Angels of Anaheim or whatever they are called. It was a beautiful day for baseball in the East Bay – sunny, warm  with a nice breeze. I splurged for seats closer to the action – Ari likes the third base line and closer to the bull pen. Since I find I enjoy the game more if we have a good view, I didn’t mind paying extra for seats in the first level closer to the field. On our way our of the car, Ari showed me a piece from his Special Oympics Backpack and I realized the outer pocket zipper had broken. This is where he usually keeps his phone, so I told him to put it either in the main pouch of the pack or in his pants pocket, but not to put it in part of the backpack with the broken zipper. I didn’t explain that it might fall out and he might lose it.  Ari also had a Sharpie for autographs and an A’s ball with some autographs we got at FanFest this year. Part of me wasn’t sure he should bring the already signed ball, but another part of me realized it is more fun to have a ball with a number of signatures – or at least, I thought it would be more fun. I should have asked Ari. I thought the ball was in the main part of the backpack. Mistake. Never assume anything with Ari. I don’t assume anything when it comes to his phone. I asked him to touch it at least two times on the way out. I could see he had his glove and frankly I had forgotten about the ball since we arrived too late for autographs. So, I was surprised, dismayed, ok, I was mad when I saw that the Sharpie dropped out when we were in the parking lot on our way back to the car.

He checked his bag. No ball. Ari asks – “Do you have it, Mom?” And starts reaching for my purse. I feel my blood boiling. I understand what happened. When we moved the phone from the outer, broken pocket for safekeeping, he moved the ball and Sharpie into it. I didn’t say – don’t put anything in the pocket because it might fall out. And he didn’t make the connection between the broken zipper and the possibility of something falling out. Ari is 18 and it still annoys me he can’t make the connections. I was tired. Getting out of a ballpark often involves saying no more times than I want to: “No, we can’t buy the $30 hat, no we can’t get a bat and a pin.” Combined with a few times of asking if he needs to use the bathroom before we hit the road, it wears me out. And the A’s lost. And it was kind of a boring game even if it was delightful to sit in the sun. Thank you Marcus Semien for hitting a homerun and giving us some hope. But I was tired and annoyed. We were never going to see that ball again. So I seethed and I yelled – though I am not sure what I yelled about. I didn’t say, didn’t you realize it was going to fall out. That was pointless, because of course he didn’t. I think I yelled I wasn’t replacing the ball. It is funny, I also understood that he loves getting autographs, but he doesn’t value them. The ball is what he wanted replaced.  After a few deep breaths, some seething in my head and feeling the sadness I can’t or won’t give up, I calmed down. No, he is not going to make the connection – yes, I am going to have to do it for him. But sometimes he does learn. Sometimes if you tell him the problem -broken zippers mean things might fall out – don’t put valuable things in pockets with broken zippers- he will learn. And he will remember. It is simply, you can’t forget any steps or make any assumptions. And the sadness remains. But that is ok. It is just sadness. It will always be in the background – lurking. It is just the way it is.

Fortunately, Ari put his headphones on in the car and I listened to the podcast, so our trip back was calm. When we got home, Ari asked me to call the A’s. I couldn’t – I needed some time to be by myself for a bit, so I was grateful that Sam made the call. No ball – yet.

Something is wrong.
Instagram token error.
Load More
© 2022 Mindy Cooks and Tutors Too.
Theme by MyThemeShop.